Prostate cancer is the second most common cancer type in men after skin cancer. It holds the 2nd place among cancer-related mortalities. PSA (prostate specific antigen) test enables early diagnosis of prostate cancer. Since the beginning of the application of PSA test, prostate cancer mortality rates has shown a drop. Intensive investigations on diagnosis and treatment of prostate cancer are still carried out.

Prostate is a gland, which surrounds the urethra just below the bladder and plays a role in semen viscosity. It is comprised of secretive cells and their peripheral connective tissues. Prostate cancer occurs as a result of the abnormal development of those secretive cells. If not diagnosed at early stage, prostate cancer spreads to the peripheral tissues by lymph and blood vessels. The most common metastasis sites are known to be lymph nodes and bones. Moreover, it may spread to the lung, liver, and other organs as well.

Prostate cancer is estimated to be present in 50% of men above the age of 70 and in almost all men above 90 of age at a microscopic level. The prostate cancer risk for a healthy man during his lifetime is approximately 17%. In other words, every one man out of 6, experiences prostate cancer. By the advent of PSA test in 1980s and the beginning of its clinical practice, mortality rates of the diseases have decreased. In the USA, prostate cancer is determined in 250.000 men each year and 95% of those people are above 45 age.

Because the cause of prostate cancer has not yet been explained completely, currently, it is not possible to prevent disease development in many cases. However, recent studies indicate that by changing the diet and life style, prostate cancer risk can be reduced.

Tomato contains high level of lycopene. Several studies suggest that lycopene intake reduces the risk of prostate cancer by 15%, whereas other studies indicate that tomato consumption decreases the cancer risk by 26%.

Soya bean contains phytoestrogen which is a substance similar to the estrogen in our body. Soya bean is known to reduce the PSA levels and communities which have a high soya bean consumption rate, show low prostate cancer rates.

SELECT study: The effects of selenium and E vitamin over prostate cancer are investigated by SELECT study (Selenium and Vitamin E Cancer Prevention Trial). Approximately 35.000 people have been included in this study and the results are about to be declared in the upcoming years.

Green tea is rich of polyphenols. This substance is claimed to slow down the growth of cancer cells. Moreover, green tea is said to reduce the amount of polyamine substance which increases the aggression of the cancer cells.

Several studies have been conducted in order to prevent development of prostate cancer. PCPT (Prostate Cancer Prevention Trial) is the most known among those studies. It has been performed on approximately 18.000 patients and while half of the patients have not been delivered a treatment (placebo group), the other half (treatment group) has been treated with Finasteride (proscarTM) roughly for 7 years. Finasteride blocks the 5-alpha reductase type II enzyme which converts testosterone to dihydrotestosterone. Thus, it is aimed to prevent reduction in dihydrotestosterone level and development of prostate cancer. At the end of the study, prostate cancer incidence among patients who had undergone Finasteride has been found to be 25% less than the placebo group. However, more aggressive prostate cancer types have been determined in the Finasteride group. The reason behind this result is not yet known and remains subject to discussion. Therefore, Finasteride treatment is not preferred by all the physicians and not regularly performed. The long-term results of the PCPT study is yet to be declared.

HAnother ongoing study is REDUCE (Reduction by Dutasteride of Prostate Cancer Events). Dutaseride is delivered to patients in order to prevent prostate cancer development. Dutaseride (Avodart™) is a drug from Finasteride group that inhibits 5-alpha reductase enyzme and converts testosterone to dihydrotestosterone. However, when compared with the Finasteride, Dutaseride blocks both types (Type I and II) of 5-alpha reductase enzymes. The results of the study are yet to be declared.

Foods
Prostate cancer incidence is higher in people who consume foods which contain high fat rate and red meat. Excessive intake of calcium reduces D vitamin synthesis which is known to have a preventive effect against prostate cancer.

Obesity
Obese people or in other words people who display a BMI higher than 32.5, suffer more aggressive prostate cancer disease. Proteins like Leptin and hormones such as growth factor contribute to the development of prostate cancer in obese patients.

Cholesterol
Studies show a relationship between high cholesterol levels and prostate cancer. LDL (low-density lipoprotein) which is known as bad cholesterol among people, causes elevation in dihydrotestosterone levels and more aggressive and rapid course of prostate cancer. Moreover, accumulation of cholesterol within the cell, particularly in the prostate cells, may lead to formation of signals that result in advance of cancer cells.

Smoking is known to increase growth of prostate cancer cells.

Localized prostate cancer may develop without any warning signs. Before the advent of PSA, prostate cancer could have been diagnosed only by feeling a considerable size of nodule during the digital examination or as a result of the pathologic analysis of the tissues removed from the patients that were operated for benign prostatic hyperplasia.

Prostate cancer may cause pain particularly when spreads to the bone. In cases with diffuse bone involvement, anemia and resultant weakness can be observed because of disruptions in blood synthesis. In far more advanced cases, lymph nodes may get larger and lead to obstruction in the urinary system which could result in hydronephrosis in kidneys.

At the local advanced stage of prostate cancer, prostate may exhibit excess enlargement and obstruct urinary tract. By compressing bladder, it may inflict pain and irritation in the bladder. At this stage, operation may be needed in order to relieve the urinary flow.

Ureteroscopes are devices with 2.5-3 mm diameter which are consisted of a tube, light source, and a lense system. Rigid ureteroscopes are advanced through bladder and urethra is reached. Particularly the stones in the lower ureter close to the bladder are treated by Holmium laser.

Diagnosis
Prostate cancer is diagnosed by detection of an increase in PSA blood test applied during the normal check-up programs. Rarely, it may become symptomatic at early ages. Symptoms such as difficulty in voiding, decrease in flow rate, and frequent urination mostly occur due to age-dependent benign prostatic hyperplasia. Because the actual enlargement site of the prostate cancer is the peripheral zone (the portions close to the exterior capsule of the prostate), it causes such obstructions and difficulty only during the advanced ages. A firmness felt during rectal examination should require a biopsy.

PSA is a protein which is released from prostate and the glands surrounding urethra. It helps to elevate viscosity of the semen prior to ejaculation. PSA is found in 2 forms in the blood: protein-bound and free. Free PSA measurement is a recent method that aims to facilitate diagnosing prostate cancer. While 0-4 range is recognized as normal for PSA, due to recent determination of many cancer patients in this range, the safety limit has been lowered particularly for young patients.

While the cancer incidence elevates with age-related PSA use, the rate of unnecessary biopsy among elderly patients decreases. There are some other PSA values which arise tumor suspicion:

Prostate biopsy is performed by TRUS. TRUS is an ultrasound device which is applied via rectal route. It is more useful than classic abdominal USG because it visualizes a very close-up view of prostate. Sometimes it can be applied only to visualize the prostate better without performing biopsy. As a result of a piece added to the trans rectal USG, sample tissues can be obtained from a predetermined specific site. Biopsy is performed by considering the age of the patient, size of the prostate, and presence of an earlier biopsy experience.

Prostatitis is reported in most of the biopsies which reveal no cancer. Particularly among elderly people this condition is frequently observed and because it does not lead to an active infection, no treatment is required.

It has two types: high-grade and low-grade High-grade type bears clinical importance. While the structure of the prostate ducts are histopathologically normal, atypical cells surround the ducts. The rate of prostate cancer detection in repeat biopsies of patients who displayed high-grade PIN in their biopsies, is 30-50%.

Almost all of the prostate cancers are of adenocancer type. In 50% of the autopsy series, the presence of prostate cancer has been detected histologically. However, most of the patients have been lost due to other reasons while the disease was at an insignificant stage. Even so, by the prolongation of the average human lifespan, prostate cancer continues to be a threat for an ever-increasing number of people.

As adenocancer is determined with prostate biopsy, the disease is graded according to its aggressiveness. Gleason score is the most widely used classification method. Based on the deformation of the tissue and cells induced by cancer cells, the specimens are graded between 1-5 (1 best, 5 poorest). The entire cancer material is analyzed and the cellular density is evaluated. The scores of the groups demonstrating the highest densities are combined to form the Gleason score. Based on those gradings, the condition of the tumor inside the prostate is assessed which enables assignment of the most appropriate treatment method.

The prostate cancer types other than adenocarcinoma are uncommon. They demonstrate a poorer prognosis compared with the prostate adenocancer.

T1: Whether the tumor localized in the prostate is not palpable or it is localized within the interior portions of the prostate. Therefore, it can not be detected by rectal examination. Diagnosis can be established by biopsy taken due to high PSA level or during the TURP operation performed to relieve the urinary obstruction.

T2: Tumor demonstrates an enlargement which can be palpated by fingers but it is still limited to the inside of the prostate.

T3: Tumor spreads beyond the boundaries of the prostate and reaches seminal vesicles.

T4: Metastatic stage. Tumor metastases to surrounding tissues or to distant organs such as bone, lung, and liver. 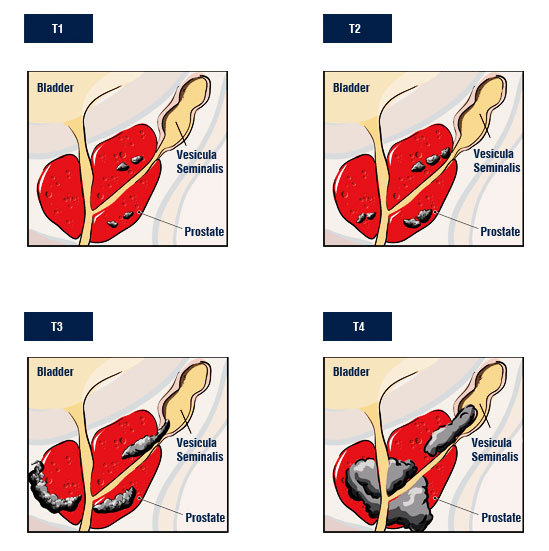